Paul and I set out on a course which we thought at the time was a simple task. Achieving what was wanted seemed like a ‘no-brainer’ at the time. Little did we know at the time it would be six years before a common sense solution would be proposed by the administration at the City of Sydney.

Some of the incidents are recorded on the Save Fitzroy Gardens website:

Fast forward to September 2017 and problems were still being experienced with the toilets. Paul and I determined that we needed help to achieve the brief given us way back in May 2012.

We tweeted to all serving councilors (except Clr Kok – not on Twitter & Clr Professor Kerryn Phelps AM as we were unable to locate her twitter account at the time) and basically asked for help.

Within days we received a response from Clr Craig Chung who offered to help. He came up to Kings Cross from Town Hall and inspected the toilets and mapped out a course of action.

Soon afterward Clr Professor Kerryn Phelps AM and Clr Christine Forster came on board with support.

At the suggestion of Clr Chung we set about carrying out daily inspections of the public toilets and meticulously recording our findings.Clr Chung obtained documents under a FOI request and asked questions on notice.

In January 2018 an overseas visitor was using the toilets when without warning, and automatically of its own accord, the toilet door opened on him. He was literally caught with his pants down.

Journalist Christopher Harris of the Daily Telegraph picked up on the “pants down” incident and investigated. The City of Sydney informed Mr Harris all was well. The council had recently inspected the toilets and all were operating correctly. What a lucky find! Our inspections, carefully recorded, showed that only about 30% of the time all toilets were operating and that about 30% of the time all toilets were inoperable and the toilets were unusable and closed. 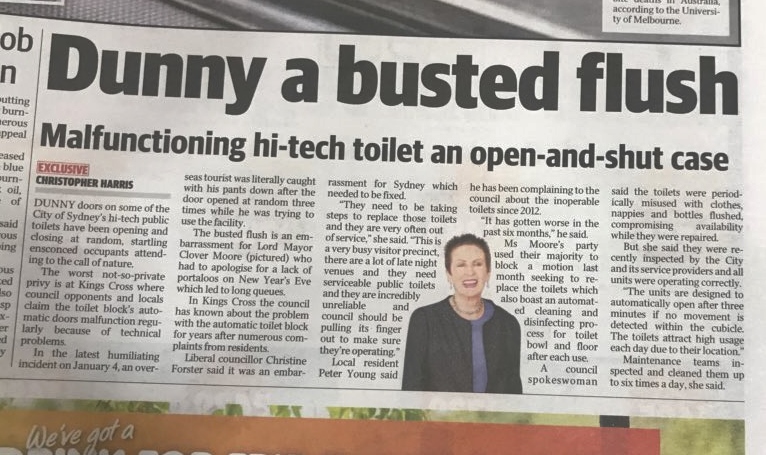 Fast forward to 11 April 2018 and we were delighted but surprised to learn that despite the #Team Clover Moore councilors using their weight of numbers to vote down Clr Chung’s proposal to investigate the installation of new toilets just 5 months earlier, new toilets would be constructed underneath the Police Station, with work to commence in mid 2018.

The City of Sydney has finally responded to my campaign and the tireless work of the community surrounding Fitzroy Gardens to fix up and improve the conditions of the three public toilets.

The automated toilets (1 wheelchair accessible, 2 mobile accessible) will be totally refurbished with work intending to commence mid this year.

In the meantime, the frequencing of cleaning will go from 5 to 8 cleans a day commencing immediately. There will also now be three security patrols per night beginning immediately in an attempt to decrease vandalism and
antisocial behaviour.

This is fantastic news! Its to great to see that after 6 years of campaigning the community has been heard. Great work Peter Young and Paul Wagner and thanks also to Christine Forster – Liberal Councillor for City of Sydney and Clr Kerryn Phelps for their continued engagement on this issue!

This is not the end of the matter. We will need to monitor the situation and hold the council to account, to ensure what has said will be done is done and on time.

Already community members have expressed concerns about some matters and we will need to liaise with the council to ensure these concerns are addressed in the construction and operation of the new toilets.

Was the campaign worth it?

The amenity of residents (and visitors) will be enhanced and that gain to the community makes it worthwhile. The cost in terms of time, effort and money to both Paul and me makes one wonder. Against that is the invaluable insight we obtained into the true character of some of the serving councilors at the City of Sydney.